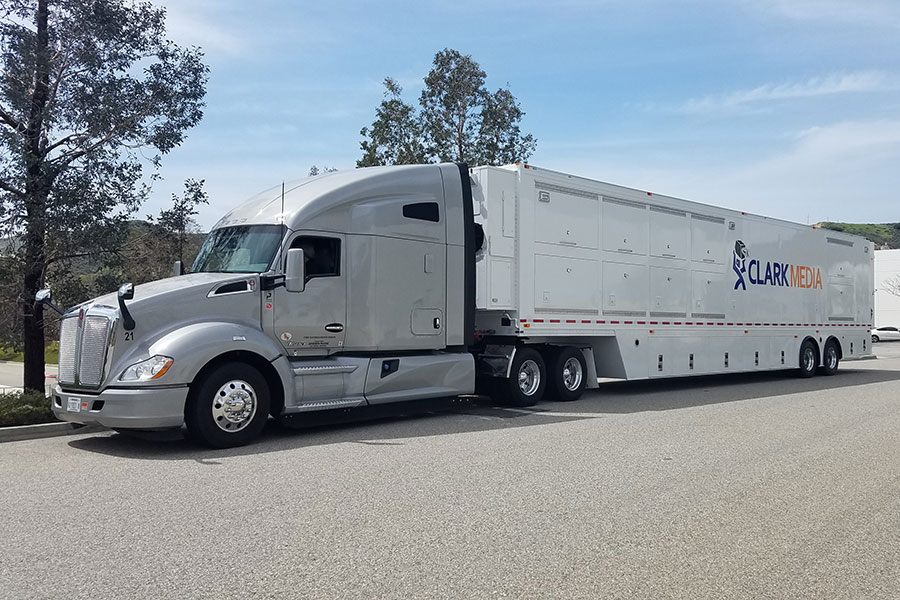 After its successful debut at NAB two years ago, Clark Media is cruising back to town with a brand new 53-foot production trailer specifically designed to meet the demands of native 4K UHD & HD productions. The trailer will be on display at the Gerling and Associates, Inc. #OE2000. "When we commissioned this cutting-edge design, we knew we'd be installing the latest technology across the board, but we wanted to go beyond that," says Gary Snyder, Clark's President and Chief Engineer. "We also took the human factor very seriously. We made optimum use of the interior space, so there's ample room for all crew positions as well as their tech setup like laptops, encoders and converters that today no one leaves home without." The new Clark trailer is also super quiet and comfortably cool. It has two 12-ton air conditioning units regulating the interior temp so it's always balanced and pleasant, not freezing. "After decades of experience," adds Snyder, "we've learned that a happy crew means a successful production."

When we commissioned this cutting-edge design, we knew we'd be installing the latest technology across the board, but we wanted to go beyond that...

Clark Media is positioning itself as "The David Among Goliaths," a production company that stands out as strong but extremely nimble. Their 4K mobile trucks and crew distinguish themselves by being flexible enough to take on any type of demanding project, ever-evolving sporting event or entertainment project. Recent projects include 2016 Presidential convention coverage for PBS, NBC's Rose Parade 2018, NBC's Golden Globes 2018, Netflix's "Beastmaster," and Audi's "Think Faster," numerous concerts, network up-fronts and 4K shows for NY Fashion Week designers.

Flexibility is what motivates all Clark's technology choices. Key features of the new truck include 16 Sony 4K/HD cameras, 4K reference monitors, GV 5ME Kayenne 4K/HD production switcher and 2ME Korona panel for 2nd screen feeds, 24 channels of 4K recording and 5.1 audio mixing room. "Quality today also means user-friendly," says Snyder, "Our 5.1 Mixing Audio Suite is not only one of the largest available, but also remarkably quiet. All noise-generating equipment, like fans and power supplies, is isolated in a separate room, which the audio teams will appreciate. "Central to the suite is a Calrec Artemis, 56 fader panel with 240 channels DSP, 24 mic/line inputs and 24-line outputs, including 3 MADI inputs and outputs. "Many productions today use a second mixer and intercom position, "adds Snyder, "we've made room for that, too."

There are distinct advantages to both the large format 35mm and the standard 2/3-inch sensor, and increasingly we're integrating the two by offering full camera control and communications.

With the ever-changing camera tech landscape, getting the mix right is essential, thinks Gary Corrigan, Managing Partner and 40-year veteran of network TV as director and cameraman. "We're taking a hybrid approach. Having worked in both single-camera and multi-camera environments, I'm excited to see the two formats merging. There are distinct advantages to both the large format 35mm and the standard 2/3-inch sensor, and increasingly we're integrating the two by offering full camera control and communications. One recent project called for 12 Sony F55 cameras cut live to tape." Clark also offers all the extras like multiple UHD lens choices, matte boxes, filters and all necessary engineering support equipment.

Another critical element that makes Clark Media the go-to for adaptability: their Mobile Fly-pack Systems. Says Snyder, "With more than 25 years of multi-camera production experience, we know needs can change on a dime. We always provide custom designed modular systems that are pre-wired and configurable to meet the demands of a lively, possibly unpredictable production."